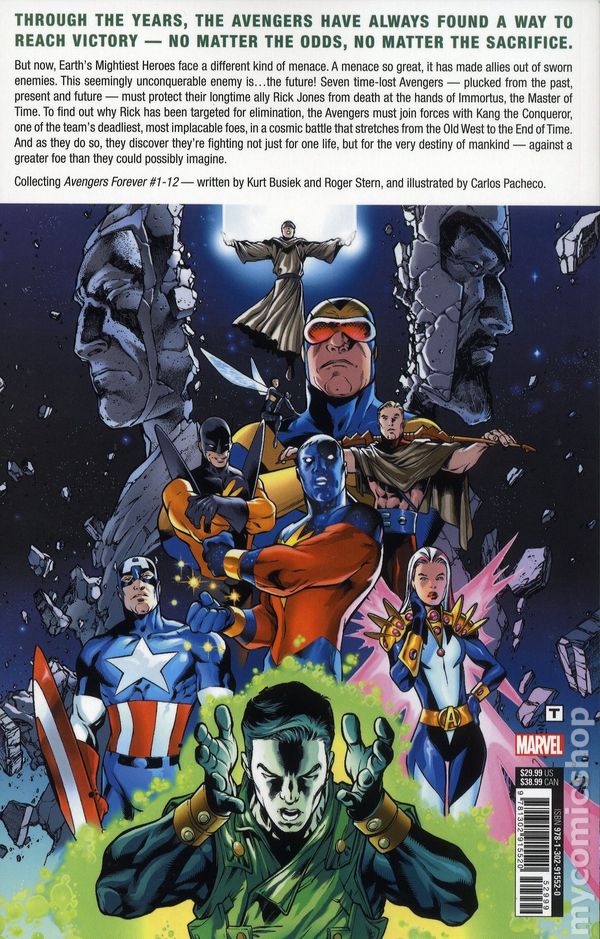 There are rumors that Avengers Forever will be the basis for the fourth Avengers movie so I snapped this up on the cheap when I stumbled upon it at MightyCon a few weeks ago. It was easily wort Immortus wants Rick Jones dead. It was easily worth my ten bucks. Avengers Forever feels a lot like one of the episodes of Doctor Who when multiple Doctors team up or a Michael Moorcock book when aspects of the Eternal Champion meet.

In short, serious shit is brewing and it takes a specific crew to settle things. Yellowjacket is snatched before he marries the Wasp. Hawkeye is plucked from just after the Kree-Skrull War. Captain Marvel and Songbird are from points in the future.

Captain America is from just after witnessing the Secret Empire head kill himself in the White House. Giant-Man and the Wasp are from a point after their divorce when Wasp is leading the team. I thought it was weird having two versions of Hank Pym on the team but I was confident Kurt Busiek would show me the way. The scribe of Astro City has recently risen quite a bit in my esteem. Anyway, a lot of timey-wimey stuff goes down.

The Avengers are scattered across three time periods and encounter Skrulls, Space Phantoms, and betrayal by one of their own before saving the day. It turns out Immortus has been manipulating the Avengers quite a bit since their inception, which serves to iron out some weird loopholes and paradoxes in Avengers history, like Iron Man turning heel in the s and being replaced by a teenage version of himself, and whether or not Vision was created from the original Human Torch's body. It also sorts out some of the continuity of Rama Tut, Kang, and Immortus' appearances in 50 years of Marvel history at that point.

The ending was pretty satisfying, a battle royal featuring thousands of Avengers. My only real gripe is that it wound up being more of a Kang vs. Immortus story rather than an Avengers story. Still, it was a lot of fun and some of the better straight-up super hero comics of the time period.

This story has remained for me an evergreen tale. Busiek really sought to streamline the inconsistencies of past Avengers tales and I'm sure most of it is still in place. This was a retcon that has not yet been retconned yet. It may have started slow, and confusing in the beginning - which makes complete sense since the first four issues was a set up to explain the purpose of the story - but in the end, everything came to together and it was awesome. Shelves: graphic-novel-reading-challeng , alternate-dimension-or-world , alternate-history , graphic-novel-comic-book , challenge-factory-challenge , time-travel , superheroes , favorites , action-adventure-aficionados-c , library-checkout.

Oh, dear. I shouldn't have put off writing this review for so long. There is a lot going on in this book, because of the complexity of the storyline. It revolves around Rick Jones, a sort of honorary human sidekick of the Avengers who has some very traumatic moments, as well as having saved the Avengers himself a time or two. Immortus, a villain from the future fixates on him Rick Jones with the intention of killing him, and Rick uses his mental abilities to pull various Avengers from different Oh, dear.

Immortus, a villain from the future fixates on him Rick Jones with the intention of killing him, and Rick uses his mental abilities to pull various Avengers from different time periods to help him, because helping him will save time itself. This is my first official Avengers comic book. That was a good and a bad thing. It was good in the sense that it gave me a crash course in Avengers history. It was bad in the sense that there was so much information, I can't really say what is canon and what is specifically part of this storyline and the fact that Immortus can manipulate timelines. This was a long book.

I checked this out of the library, but regardless, I can definitely say I got my money's worth. The stories are quite different from my exposure to the Avengers from movies and TV shows, and I ended up getting introduced to a lot more members than I would have if it focused solely on the traditional team. Honestly, I feel like it's a full time job for Marvel comics developers to keep track of the massive Marvel universe.

So much happens, and it impacts the Marvel characters more or less across the board. I think writing this book was probably a huge challenge and it may have caused some serious migraines as the authors worked to keep it straight. At the same time, it was clearly a labor of love and a loving homage to the Avengers to people who really care about the stories and the characters.

The artwork is bright and descriptive, a bit dated looking compared to newer books, but still appealing.

Clearly a lot of effort was put into drawing the same characters from different timelines as related as in same character , but different due to their different experiences. There are some scenes that must have taken a long, long time to draw in all the characters, so that was a wow for me. Also, I like that there were footnotes that described the characters involved in the panels and when they first appeared and referenced which book they were featured in; as well as and the major events related to the various panels.

That why I said earlier that this was like a crash course in Marvel history, Avengers and otherwise. While I am quite sure that I prefer the newer artwork, and I think I will probably stick with the newer graphic novel publications for that reason, this book energized me to dive in headfirst even more into the Marvel Universe. I'm quite happy my library had this and I gave it a chance, even though it was a bit older book.

Perhaps the best Avengers tale ever told. Probably not the best choice for the uninitiated. But for long-time Avengers fans this one's pretty hard to beat. Not a bad series. A lot of reviewers noted that, if someone didn't know all the history of the Avengers, they'd be lost in this book, as various Avengers from various timelines are brought together to fight for the sake of time itself.

follow url Perez in many places. Apparently, this book is kind of a kickstart to the Marvel Universe of the 21st century. I'll be looking forward to reading more of Marvel to understand why this is so. Aug 10, Nicholas rated it did not like it Shelves: modern-marvel. Kurt, my man. You let me down. I am so disappoint. I am not a fan of time travel stories. I mean hypothetically, they could be done right, but I've yet to find a single case where there aren't at least tiny flaws in logic present. Most of the time there are huge gaping holes in the logic. Sadly, Avengers Forever falls into that latter category.

The premise is interesting - Avengers from different time periods are assembled to rectify dangers further down the time stream. As humanity spreads Kurt. As humanity spreads among the stars and activate the "Destiny Force," they turn into a conquering menace to the rest of the multiverse and a group of self-appointed time guardians employ Immortus to stop humanity in its tracks.

While the guardians want humanity expunged from all time streams where they pose a threat, Immortus, who at one point was human, attempts less radical measures and opts for more non-invasive surgical strikes to the time period, spawning a cross-millenial game of catch and mouse that ultimately centers upon the key human who first manifests the Destiny Force: Rick Jones, longtime Avenger buddy pal and adventure bro. Probably I'm not immersed enough in the lore of the Marvel Universe to really see how cool this story is, but I just can't get over a ton of objective flaws.

Not only is it confusing as hell, but it just doesn't make any sense at all. For example: at one point the Avengers feel it necessary to escape the time stream I don't know what that means, but ok , so that they can be safe from Immortus and his masters who have complete control over time. Alright, seems logical. They escape and can finally take a breather unpursued by Immortus who can't see outside the time stream. If Immortus is smart, which he'd kind of have to be, right?

If Rick Jones and humanity are a colossal threat to the multiverse, why would you attempt to take them out the day that Rick manifests the dangerous Destiny Force?

Why not pick a point in time because you can, right? Isn't that the point of being master of time? Why not step on the amoeba that would turn into humanity several millennia down the evolutionary path?


Why wait and try to take them out when the most powerful humans can act as guardians for their weaker brethren? I could seriously go on forever on ways you could reduce this story to like five pages, but let's move on to more pressing concerns. The writing here is just atrocious. I know Busiek is better than this. This is the man who gave us Astro City, Vol. This pile of garbage is unacceptable. Just two of the innumerable examples of shitty dialogue that mars an otherwise beautiful and expansive picture book: "Uh-oh!

They're not seeing us as we truly are! 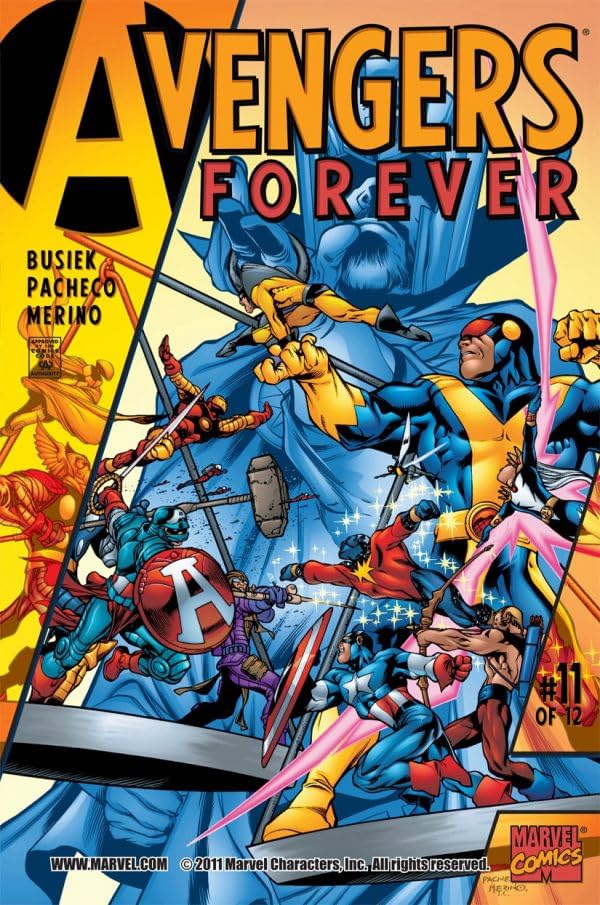 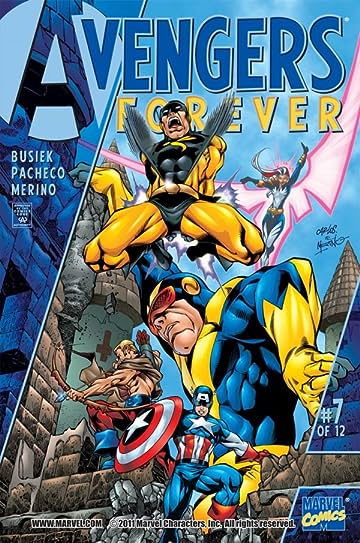 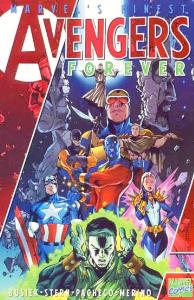 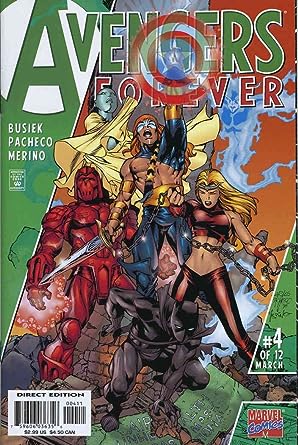